We were at a local Carniceria (Mexican butcher) picking up some awesome marinated flank steak. When I went to the counter to pay I saw that they had some Spanish peanuts and said "Oh, look... they have Spanish peanuts"!

Squink looked at me and said "Does that mean you can speak Spanish when you eat them"?

I looked at him and smiled and said "Why yes, I believe they do"

Later that day I was trying to translate a joke from Spanish into English to my husband and finally gave up and said that I just could not translate it correctly into English.

Squinky looked at me and said "You need to eat the Spanish peanuts then, mama".

Email ThisBlogThis!Share to TwitterShare to FacebookShare to Pinterest
Labels: sqotd

They grow up so fast 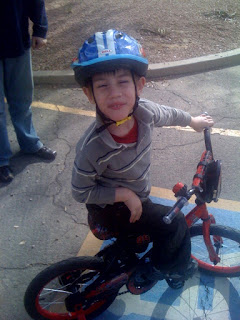 Email ThisBlogThis!Share to TwitterShare to FacebookShare to Pinterest
Labels: sqotd

A Christmas song was playing on the radio that is based on Johann
Pachelbel's Cannon in D.

Mom (to Schatzy): That's Pachelbel as the background right?