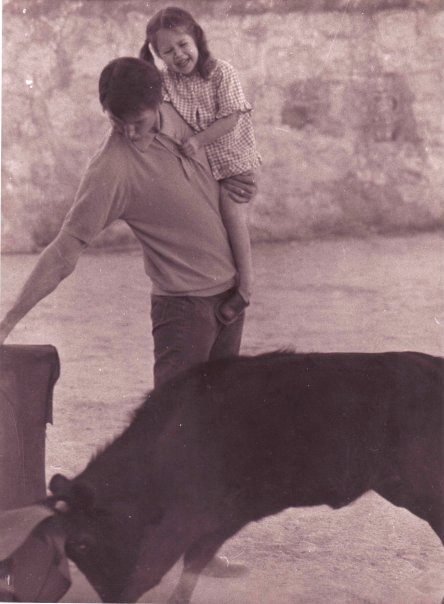 I was born in South America. My fate set in motion by my parents. My mother, intrigued by Latin America. My father by Bullfighting. Though they both are from the American Southwest, they both have a wandering foot (to invoke a metaphor that I am unsure if it even exists). My father went to a fancy schmancy international business graduate school and as such he was given a job that would put him, my mother and all of his offspring on a magic carpet ride that traveled well. However, that business was not, in my opinion, his true passion. His true passion is bullfighting. It is what I remember him doing. It is what I have seen drive his soul.

One of my earliest memories of him is in that photo above. What do you see? A crying little girl in a man's arms while he seems to be going through some bullfight moves with a calf? If that is what you saw you are absolutely right. What you may have completely wrong is a possible assumption that I hated being there and wanted him to put me down and get me out of that ring.
That is wrong. I was crying because my clogs had fallen off and I was convinced that the dreadful beast was going to eat them. I kept crying "Mis zuecos, mis zuecos.. el toro los va a comer. Yo quiero mis zuecos" (Mi clogs, my clogs, the bull is going to eat them. I want my clogs). The thing is that I felt very, very safe. The event where this happened was a no-kill situation (in case you were wondering). I can recall, that my only concern was about my shoes.

in 2009 my husband, son, and I traveled to see my father and as one might expect he was planning a tienta (that is what you see in the picture above). It is an afternoon of using capes on some calves. I recall spending the afternoon passing him his capes and such as he maneuvered around the ring. And then, at one point... he looked over his shoulder at me... and I knew what he was going to ask, it was what I was hoping would happen. He turned to me and asked if I would let my son in. I was delighted. I had watched him move around the ring and saw that there was still this grace that I had always witnessed in him while he was in a ring... and as I was about to say yes.. I stopped. I was married and this was not a choice I could make without involving my husband... even though my whole body was saying "yes, this has to happen".  I told my dad that while I was a complete go, I had to ask my husband how he felt about this.

I recall running to look for my husband and when I found him I looked him in the eye and asked "Can my dad take Squink in to the ring with him?"

My husband looked at me, and asked what I thought. I told him that I thought it was perfectly safe. That it was something I really wanted to have happen.

"I trust you to make the right decision", he said to me. I know he knew I was going to go through with it.

Without a second thought, I ran and picked up my little son, and carried him towards the ring. My husband walking next to us. I was whispering in my son's ear that I was going to hand him over to cowboy grandpa and that he was going to get to do something that I got to do when I was little. He seemed intrigued.  Excited even.

We arrived at the fence barrier. I held him close, and kissed his check and handed him over to my father. 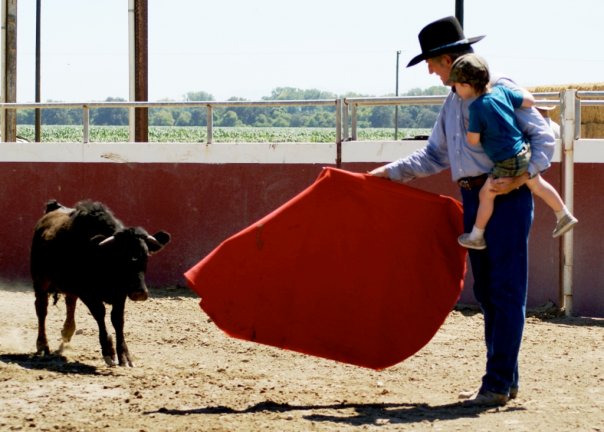 I could tell right away that my little boy felt safe in those same arms that had held me. I could hear him him tell my father to "get him, get him", leaning forward to get a better look at what was happening between my father and the calf, completely at ease in a situation that felt so familiar to me. I stood at the side of the ring, joyful at watching my father hold my son in the exact same way he held me at that age.
Posted by Blair at 11/01/2012 11:31:00 PM